I’m pleased (and relieved!) to report that Baby Hope and I had a very smooth journey from Tokyo to London, including a pain-free 12-hour flight on British Airways.

I’d been a bit anxious about taking such a lengthy journey with our wriggly almost-6-month old, so was glad when we got off to an efficient start.

On the morning of our flight, we hopped into a taxi from Akasaka, and arrived at Haneda International Terminal in 18 minutes. From our front door to the airport lounge (via bag pick up, check-in, security and immigration) took just under an hour!

Top tip: Having our bags couriered to the airport and pre-booking a taxi the day before really helped speed things up. 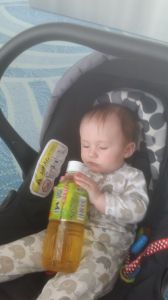 After picking up our bags at the JAL ABC counter, we walked a few steps to the British Airways check-in desk.

We’d reserved online our seat – 21G, World Traveler Plus (Premium Economy) – and Hope was designated a “lap child”, with a bassinet option. Imagine how delighted we were to then be allocated 4 spacious seats at the bulkhead. Bonus!

As well as this good news, we were also given the green light to take Hope’s much-loved car seat onto the plane. This was a big relief as I knew there was almost zero chance of her lying down to sleep in the pre-assigned bassinet.

Another big plus was being able to take the baby buggy with us until just before we boarded. Since Gate 144 was quite far into the terminal, this served as a handy way to cart our hand luggage around, while I carried Hope in the Ergo.

Top tip: Secure seats at the bulkhead as soon as online check-in opens, and take a buggy with a detachable car seat if possible.

We were shown to a very short security line, where I performed the usual drill of placing my bags and electronics into separate trays.

I still chuckle when thinking about the young Japanese security guard who asked me to lift Hope’s buggy and car seat on the belt to be scanned along with our hand luggage. “Sure” I said, and held out Hope for him to hold. He looked truly terrified and declined my offer, hands flapping and brow furrowed. Security check, waived!

Top tip: Don’t be afraid to ask for assistance!

After a 1-hour delay we were invited to take advantage of early boarding. Although I was reluctant to have Hope on the plane for any longer than necessary, I was grateful to have some additional time to get settled. This meant securing as much space as necessary in the overhead compartments directly above our seats, and confirming with the flight attendants which set-up (bassinet, plane bouncer seat, or car seat) I’d like for the baby. It also gave us time to get familiar with the infant seat belt, which had to be used for take-off and landing.

We received lots of words of encouragement as the other passengers filed onto the plane – mainly “best of luck!” and “you’re brave!”

Top tip: Get onto the plane as soon as possible, to get comfortable and prepared.

Let’s face it: there are better ways to spend 12 hours with an active baby than in a confined space with a couple of hundred strangers. Thankfully, we had a really good experience. The BA meals were great (steak, and chicken curry) Hope kept to her nap schedule (taking 5 naps of varying lengths), and I even managed to have a glass of wine and watch a WHOLE FILM (Jackie – very good!).

Throughout the journey, I kept a small eco-bag filled with Hope’s toys on the seat beside us, which posed no problem for the cabin crew during take off and landing. As well as her favourites – The Very Hungry Caterpillar, Sophie the Giraffe, Melonpan-chan ball – I took some new bits and bobs (Winnie the Pooh hairbrush was a winn

er), and to mix things up let her play around with some PET bottles and veggies from my meal trays.

Ordinarily too nosy to feed in public, Hope nursed really well, especially when the lights were off, and also drank some formula which I mixed onboard using bottled water and Hagukumi 100g sticks. Because it’s often tricky to persuade her to nurse on demand, the latter gave me peace of mind during take-off and landing when it’s best to have baby swallowing to equalize ear pressure.

During Hope’s wakeful periods, we spent a fair bit of time walking up and down the aisles, and making friends with the flight attendants in the galley. This was most helpful when I needed to use the bathroom, and when we needed to change Hope’s clothes after some unexpected nappy incidents!

Top tip: Take a small bag of toys and be prepared to nurse / feed and change more than usual.

We have only positive things to report about BA’s service, and I really can’t say enough good things about everyone we came into contact with along the way.

Being met by Hope’s grandparents and cousin upon arrival at Heathrow airport was the icing on the cake. (The subsequent jet-lag was another matter altogether!) 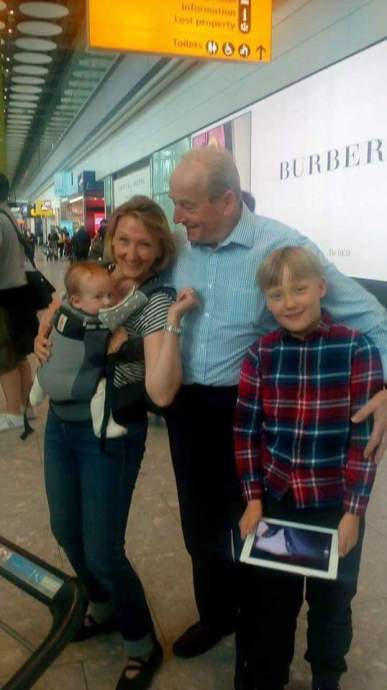 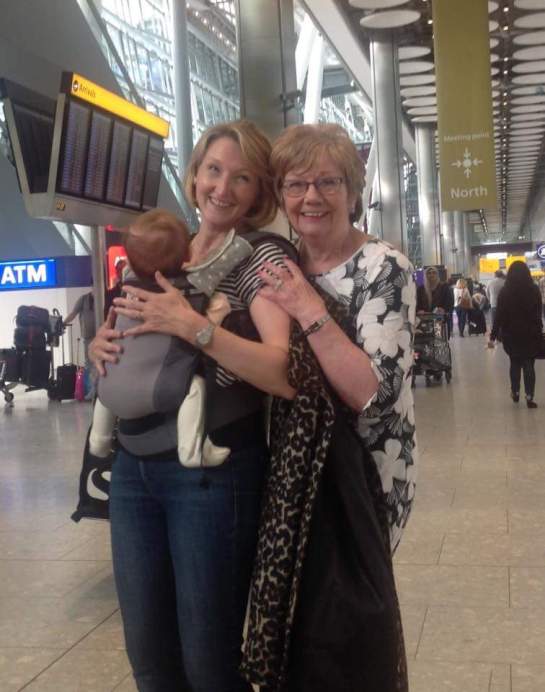 Since Hope has learned to sit up unassisted and crawl, backwards commando style, during our holiday, let’s see how the flight back to Tokyo goes . . .

I hope the above information can prove useful to other new mums and dads in the future. How was your first flight with a baby? I’d love to hear!