Family enjoying day in the room.

Did you know that in Japan, after the birth of a baby, both parents can take up to one year of paid leave at the same time?

No? Neither did we!

Today, as my husband starts his three months of “paternity leave”, he joins a tiny minority of men who take time off to care for newborns and young children in Japan.

Currently, only around 2-3% of new dads take advantage of the country’s progressive and generous Childcare Leave legislation, which permits up to 12 months of paid time off. By 2020, the Japanese Government’s Ministry of Health, Labour and Welfare would like the number to reach at least 13%.

This target is part of a larger economic strategy, designed to support working parents. Having fathers become more involved with child-rearing is pin-pointed as a way to help keep women in the workforce, and raise GDP. Sharing childcare and domestic duties is expected to make motherhood less of a burden and, in turn, raise the birthrate. Or so the story goes.

The Government seems to be putting its money where its mouth is. For some years, Japan has had some of the most progressive parental leave laws of any developed nation (data below, from 2014). 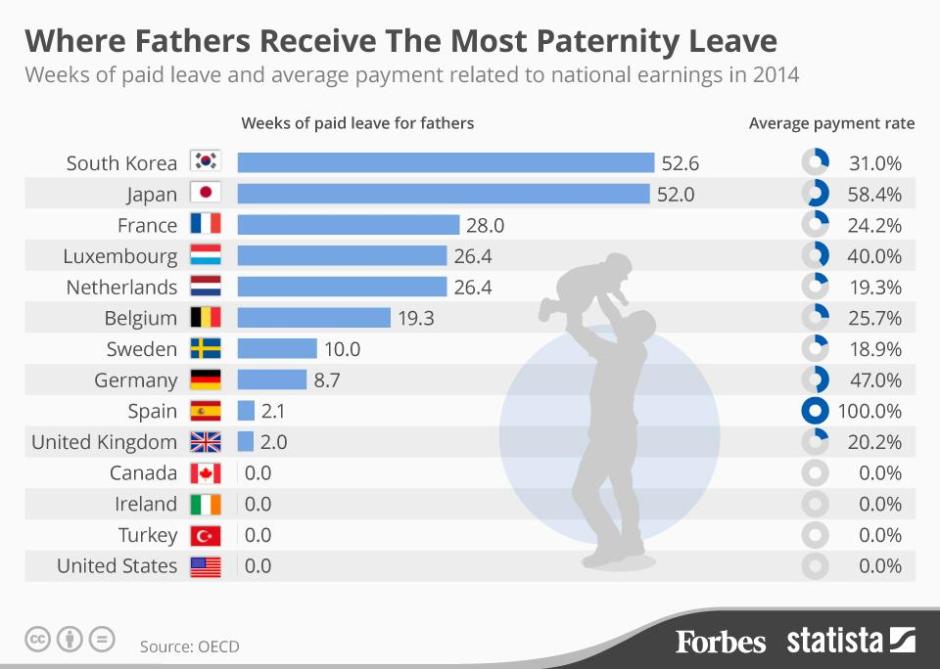 Male employees who’ve worked for the same employer for at least one year are entitled to take up to 12 months of paid Childcare Leave. This can be taken in tandem with, or consecutive to, the mother’s period of parental leave.

If both parents opt to take Childcare Leave, one parent can be granted an extension until the child is one year and two months old (though the length of leave that each parent may take should not exceed one year).

During Childcare Leave, the Japanese Government will pay 2/3 of an employee’s basic monthly salary for the first 6 months, and 1/2 for the next 6. (Bonuses are not factored into the calculations, and there is a cap.)

No income tax, labor insurance or social insurance payments apply during Childcare Leave since the worker is not receiving an income from their employer.

So, why do so few men take paternity leave?

Although employers have a legal obligation to tell employees – male and female – about Childcare Leave benefits, it seems that Japan’s deeply ingrained workplace attitudes get in the way of progress.

On the whole, Japanese corporate culture discourages absence; managers are disinclined to approve employees taking time off for any reason. Promotion systems are based on seniority, and employees are generally rewarded not for performance but for the time spent in the office – particularly beyond regular working hours. Removing yourself from the office for an extended period of time means you will be sidelined for promotion, or ostracised for not being a team player. All this, coupled with the pervading idea that men should be the main / only breadwinner, means that paternity leave is a truly foreign concept for most companies and families.

While HR departments in larger firms know that cultural pressures should not stand in the face of the law, it could take years for Japan Inc to normalise Childcare Leave for men.

It was not until a couple of months after I’d given birth that we were made fully aware of Japan’s Childcare Leave legislation, and the benefits afforded to dads – when a British friend working for a large firm mentioned that he’d be taking leave to support his Japanese wife.

I really do wish we’d known about the law beforehand; having my husband’s full-time hands-on support during the early months, when I was feeling most vulnerable, would have made life as a new mum so much easier.

Since he started to pursue the conversation about paternity benefits, my husband has been told a number of times by coworkers and complete strangers that he is ‘brave’ and ‘impressive’ for following the law . . .

Unnecessary praise aside, he’s ready to spend some extended quality time with our soon-to-be 9 month old daughter, and I’m really looking forward to returning to work at the beginning of September.

Apparently the future of the nation depends on it!

I sincerely hope the above information can be of use to other families who are expecting and / or have young children. Has your husband taken Childcare Leave in Japan or elsewhere? I’d love to hear your stories!